Greensboro Urban Ministry has been a vital part of the community for over fifty years. We were founded in 1967 by a number of local churches in the city.

They wanted to demonstrate Christ’s love to people who were impoverished and homeless by providing them with emergency assistance of food, shelter, and clothing.

Through the years, our purpose has remained the same:  demonstrate God’s love to our neighbors in need by offering services that effectively meet their immediate needs and identify solutions that promote their long term stability.

Downtown congregations form the organization and the Emergency Assistance Program is launched. The ministry operates out of Grace United Methodist Church at 1007 West Market Street.

The building at 407 N. Eugene is purchased and the GUM offices move there. This would be home for the next 17 years. Discussion of a Pastoral Care & Counseling Program begins and is developed and launched within two years.

A new building is identified due to rapid growth. Plans are made to build a new facility at 305 West Lee Street. A capital campaign is launched to fund construction and 3.6 million dollars is raised. Construction will start within a year and most of the programs will be housed in the new location.

GUM implements new programs that focus on supporting the clients of GUM as they work on goals that increase their stability and reduce episodes of crisis. This program grows from this year forward and today, case management services are offered to anyone who comes to GUM seeking assistance.

You help us change lives. Greensboro Urban Ministry is grateful for your generous support. Please stay with us on the front lines of providing help and hope to those who need it most in our community. Thank you! 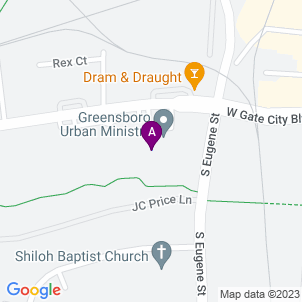